Regarding Meshes in Unity

Maybe it's just my OpenGL (1.1) background but here's a few roadblocks I've hit while doing procedural Mesh generation in Unity, along with a few tips not many people seem to know of. Some of this knowledge has been useful even outside my procedural experiments.

A few pitfalls and tips

Out of all the F2P games I've tried, Warframe has by far the best microtransactions I've seen. So much so that I've been meaning to write this article so I know what to do if I ever find myself in a similar position. However, let me just say this is not a review, just an overview of their Business Model and why I think it's great:

In Warframe there's only 2 things where you need to spend money: Slots and Colours. The free currency you're given at the start can get you quite a few of either and you start out with a decent (but small) selection of colours to give your character a unique look.  Everything else has a chance to show up in random "alerts" or invasions. These events are quite common, however it might take some time until you're lucky and find what you need (I didn't say it was perfect).
You can also purchase boosters but I will get to those later on.

No "renting" costumes or any such bullshit. What you buy is yours forever. When you're purchasing a virtual product you shouldn't have the added insult of having them fade away after some time. The mods system is also amazing and you don't lose anything by trying out new builds.

Digital Extremes is an experienced game company. The game looks great and has a lot of "crunchiness". There's a great feeling when your properly modded machine gun is blowing chunks out of the heavily armoured Grineer. Or when your saw-launcher slashes infested into (literal) pieces. All the weapons feel useful in some way (although the community swears some are considered overpowered, as some always are). The game is also based on PvE fights and doesn't have many of the issues of the more competitive games in it's genre. Even so, an experienced game company can turn their amazing game into a grindy, boring mess when trying to get the average free player to give them their money.

Sure there's some grinding. Without wanting to go too in-depth into the mechanics, you'll need to level your Suit and your weapons to level 30 to guarantee maximum effectiveness, but a single day's effort is all you'll need to fully level an entire set. You can buy boosters to drastically speed this up if you just want to spend a few hours levelling your gear.

There's always a new reward around the corner. This mission you did just levelled your Pistol. You can now put a slightly better mod on it. How about sticking that multi-shot you got 2 missions ago? Or maybe you now have enough nano-spores to craft that new gun... I rarely find myself looking at the end mission screen and not having anything new to fiddle with. You'll never hit a point where the game will push premium content in order to make it less tedious (I'm looking at you World of Tanks).

Weirdly enough (in the F2P industry), they're also moving AWAY from tedious farming and some extremely rare resources have been made more common or easier to obtain. Eg. : When I started out, Warframe parts used to be rare drops from bosses that you had to pick up once you killed them. You now always get warframe piece every time you kill a boss and you don't have to go around looking for his corpse in case you missed it.

Crafting guns takes between 12 and 24 hours and putting together new Warframes (classes/suits) usually takes 3 days. You can rush these for real money but, besides the 3 day wait (along with time to craft each piece that makes up the warframe), it's pretty managable. You'll most likely still be levelling your current gun when the new one's ready at the forge (I currently have around 5 primary weapons ready to be picked up).

Reaching out to the players

I think the random number generator bug post speaks for itself but I shall digress anyway.
Warframe has patches released relatively often (every 2-3 weeks I'd say) which add new content (like new tilesets, weapons or maybe an entire overhaul of the damage system). When there's a need a hotfix will be released ASAP. What does ASAP mean? Literally 3 hours after a patch. There's also the hilarious "red text" that always precedes these releases: 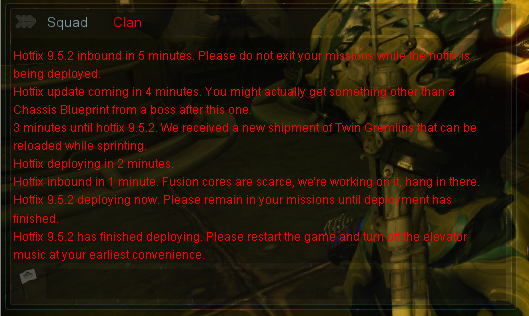 In short, they tell the community what's wrong: when they screw, they work on fixing it and then tell everyone what just happened instead of compiling a changelog and running it through QA for a few weeks (I honestly envy their ability to do this and still have an incredibly bug-free game). They invite everyone in-game to watch their live Twitch livestreams so they can know what's up and there's even a reward for everyone afterwards.

That being said, here's a rundown along with some bad things:

The good:
The meh:
The bad:

Phew that was hard to write, I kept having to stop myself from writing a review several times. Nevertheless, Warframe is quite enjoyable and I think anyone that's slightly interested in the shooter genre (or multiplayer game design) should give it a go.
Posted by Crushy at 21:19 No comments: